It was woman power to the fore as 20-year-old Kajal Kumari tamed a 86-member field, that included 55 men, by scoring a maximum of 14 points from seven rounds in the Swiss league of the fifth Carrom World Cup here on Saturday.

“I am happy to win a tough competition as there are so many good players from India and Sri Lanka,’’ said Kajal, when contacted in Korea.

The former National champion and five-time Federation Cup champion, Kajal had emerged the ICF Cup champion two years ago in the international arena. In the last World Championship she had placed ninth.

In topping the league, with all rounds played through the course of a day, Kajal beat the reigning World Champion Chamil Cooray of Sri Lanka, and also the India No.1 Riyaz Akbarali.

Interestingly, it was the first time a woman was winning the combined event in the history of the game.Kajal, who works with the Indian Oil Corporation (IOC) in Bandra, said that she was confident about her game, especially after having made the women’s doubles final with compatriot S. Apoorva the previous day.

In the league, played in a format of 45 minutes, 25 points and eight boards, whichever is earlier, four players tied for the second spot with 12 points.

Chaml Cooray placed second, and K. Sagayabharathi was third on the basis of their better net score.

Prashant More and Azim Ali of Maldives were fourth and fifth respectively.

The competition, featuring 17 countries, including Switzerland, Korea, Pakistan, Malaysia, Japan, France, Germany, US, Poland and Serbia, will continue with the team championship for men and women on Sunday. It will be followed by the individual event for the two categories subsequently.

The International Carrom Federation (ICF) is an association governed by Swiss law founded in 1988 in Chennai, India. Currently the head office is based in Zurich, Switzerland.
Previous Synco
Next Carrom World Cup 2018, Korea : Swiss League RESULTS 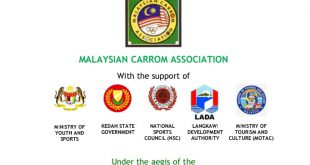 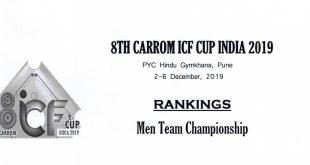